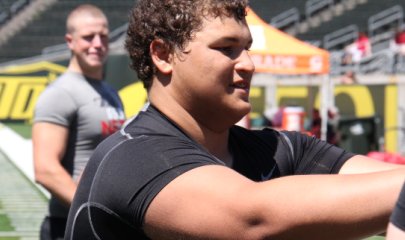 From No Name To The Opening: Skyler Phillips Sudden Impact

From No Name To The Opening: Skyler Phillips Sudden Impact Skyler Phillips is 6'3" and 330 pounds of butt kicking linemen from Churchill High School in Eugene, Oregon.

By today many collegiate coaches are passing his name back and forth in a mad dash to get him to a camp or to a school visit.

And by the time July 4th rolls around he may very well be a National name.

What is the reason you ask for this sudden interest in Skyler Phillips?

Skyler has just concluded the most amazing 72 hours we think we have ever seen anyone take on.

The Churchill High School Junior tonight is one hot commodity.  His amazing showing at the Nike SPARQ Combine scoring a 98 plus was a real eye opener.  That put the 6'3", 330 pound monster linemen in some elite company Nationwide.  That score and his 5.3 laser 40 time placed him in an elite crowd. A score so high that he is in the top 1/4 of 1% if all linemen in the Nation and one of top scores this year.  For guys over 300 pounds he may in fact be #1.

As he was leaving the event still smiling and not sure what to think we passed his information to the Nike Staff who later that evening authorized his invitation to come walk on to the Nike Football Training Camp.  And Skyler was all in and ready for more.

As camp began Phillips sat against the wall waiting for the preregistered guys to go through first.  He did not flinch.  Simple staired straight ahead quietly waiting.  Eventually he and a few dozen hopefuls got in and the camp started.

Less then 24 hours after his potentially life changing performance at the SPARQ event he now stood in line with the top linemen from the Region and realized that he had the chance he had been hoping for.  A chance to just show what he could do. "I am confident in myself.  I came to do my best and that is what I am here to day," he told us as we spoke briefly out in the line.

One question lingered for us.  Would those numbers he put up in the combine translate to the highly competitive environment of the Nike Camp?  Looking at his massive frame, quick feet, and that twinkle in his eye was enough for us.

The show was on.

Drills started and the big boys were pushed from station to station in a format meant to emulate that of a big college practice.  For 45 minutes about 75 of the best offensive and defensive linemen ran, shuffled, jumped, and spun themselved out on that turf.  Skyler Phillips was in the thick of it and looking very good.  Sweat dripped from the big man but his motor seemed to be running full tilt.

"I got this," he said smiling in response when we asked how he was doing.

The NFTC Camp reached a mid point and the camp moved outside to Autzen Stadium.  The next hour was spent with some top O'line Coaches from the Nike staff and the group of hopefuls listened and reacted.  The skills taught were technical and designed to help these kids take on the defensive linemen in the one on one drills which are almost always the highlight of the entire camp.

No where else at the camp does it get heated up like in these trench battles. Major blows are exchanged violently and there are no pads.

Skyler was attentive.  He picked up on the techniques and spent extra time repeating what he had been taught.

"The coaching was great.  I really learned a lot.  Basically I was taking it all in and was so focused on what we were being taught I did not socialize with the other guys much," added Phillips.  "I had no idea who any of thsoe guys were."

Those guys he mentioned on defense included Eddie Vanderdoes who has 45 offers.  They also included top linemen Michael Kluge of Aloha and Doug Brenner of Jesuit as well as several other collegiate caliber guys.

Then the time came and the battles began.  Out there early in the drills was Phillips at his right guard spot and he did the one thing you want to do if your in that position.  As the first defender came off the ball he made a perfect step from inside out and shot his right hand out to meet the charging opponent.

He landed a "punch" so hard into the chest of that kid it echoed off the press boxes 100 yards away.    He finished that block and before the day was over he had finished a whole lot more.

"What is that kids name," asked the Nike Staff.  They wrote it down once we told them.

"It was cool because my adrenaline was pumping and I was really into it," said Skyler.  "When they started calling me by my name and not "Number 731" I realized maybe I was doing pretty well."

Pretty well turned into Camp MVP for the Offensive Linemen.  In that moment Sklyer, as tired as he was, acended from Churchill High School student -athlete to Regionally known college recruit.

Not bad for a big kid from the valley right? Bryon Bodon in yellow of Crescent Valley is a top linemen form Oregon and here is backed up by Skyler Phillips who based on the past 72 hours is now joining Bodon and others on those top prospect lists.

But that is not the end of the story.  No sir.  He called today to let us know there was one more thing happening for him as a result fo all of this.  And this is something kids all over America are dreaming of.

"I had a message to call Nick from ESPN so I did when I came home from school," he said.  "He let me know that based upon my performance at the SPARQ and Nike Camp I was being invited to The Opening at Nike.  Right now I am speechless."

At no time in our covering High School sports have we seen an athlete move this far up the ranks this fast.  The Opening is going to be a four day football experience like no other.  Four days over the 4th of July at the Nike World Campus that will be televised and covered like nothing ever has before it.  Only the Top 150 Football Prospects in the Nation will be there.

And now so will Skyler Phillips.

Tune in tomorrow for Part 2 of the Skyler Phillips story as we take you back to last season and cover a little more on his amazing story.